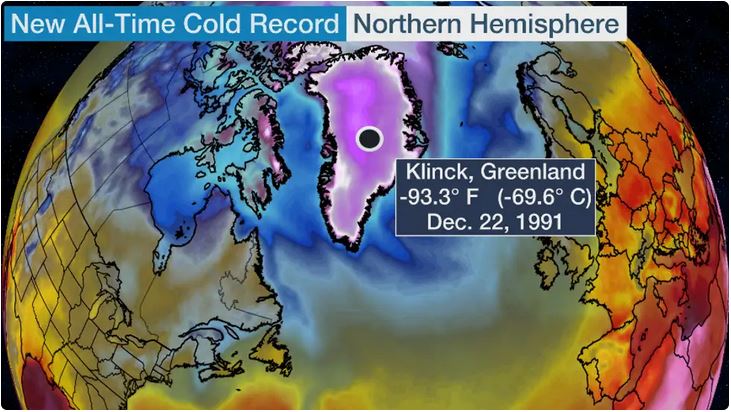 WMO has recognized a temperature of -69.6°C (-93.3°F) at an automatic weather station in Greenland on 22 December 1991 as the lowest ever recorded in the Northern Hemisphere. The temperature record was uncovered after nearly 30 years by “climate detectives” with the WMO Archive of Weather and Climate Extremes. It eclipses the value of -67.8°C recorded at the Russian sites of Verkhoyanksk (February 1892) and Oimekon (January 1933). The world’s coldest temperature record, of -89.2°C (-128.6°F) on 21 July 1983, is held by the high-altitude Vostok weather station in Antarctica. 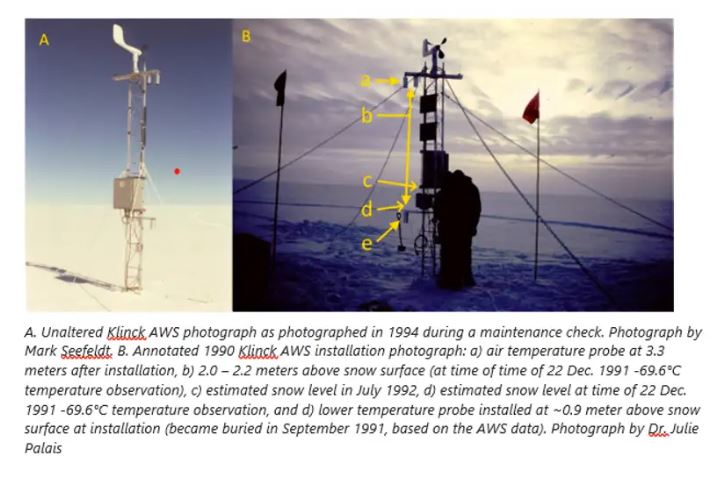 Image from WMO press release of the weather station.

The WMO Archive of Weather and Climate Extremes includes records such as the world’s highest and lowest temperatures, rainfall, heaviest hailstone, longest dry period, maximum gust of wind, longest lightning flash and weather-related mortalities.
The weather station at Verkhoyanksk, which previously held the northern hemisphere cold temperature record, hit the headlines when it recorded a temperature of 38°C on 20 June during a prolonged Siberian heatwave. WMO is currently verifying whether this is a new record high temperature north of the Arctic Circle (a new category for the archive).
In the era of climate change, much attention focuses on new heat records. This newly recognized cold record is an important reminder about the stark contrasts that exist on this planet.